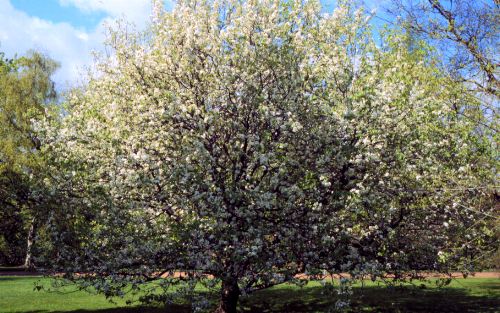 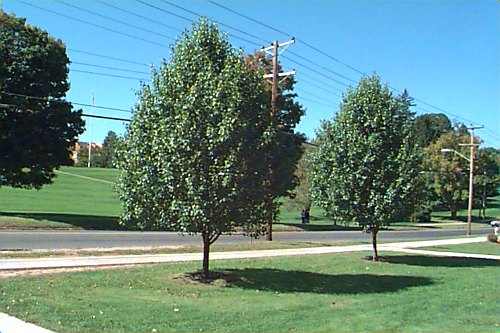 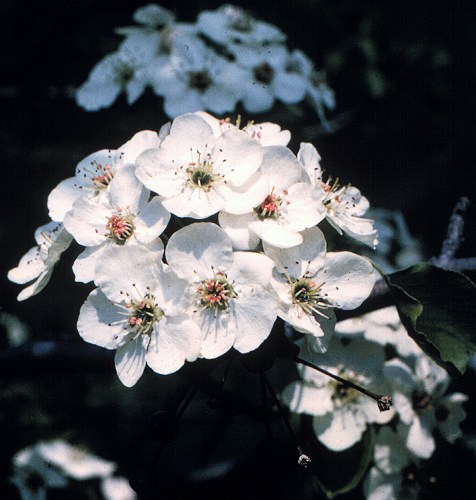 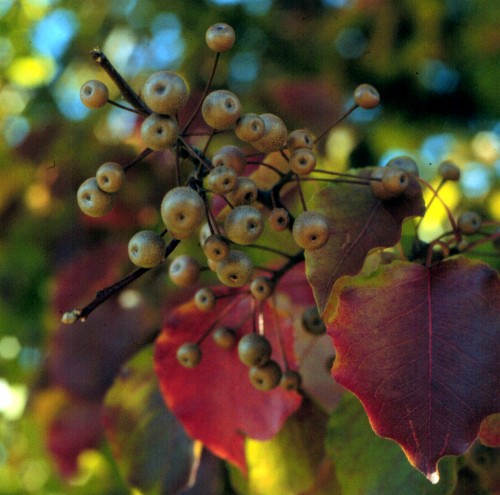 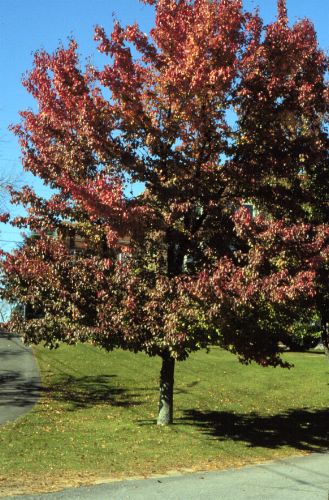 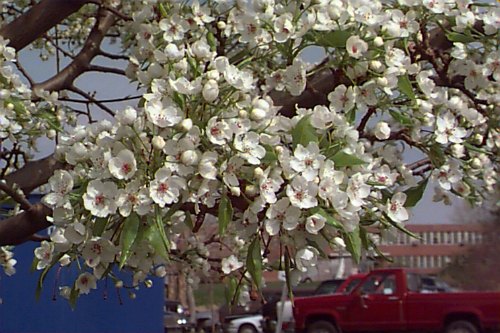 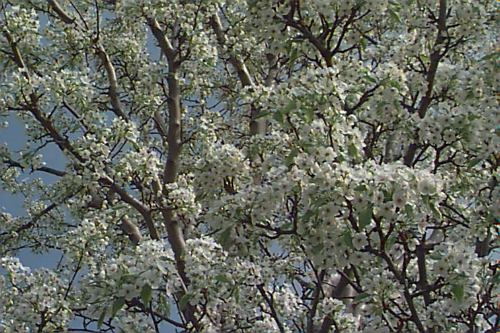 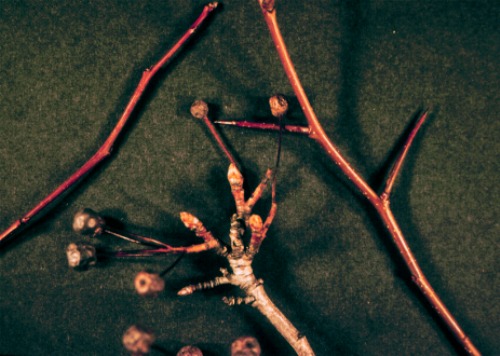 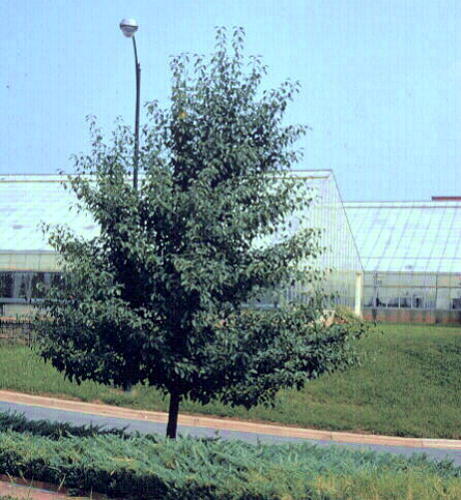 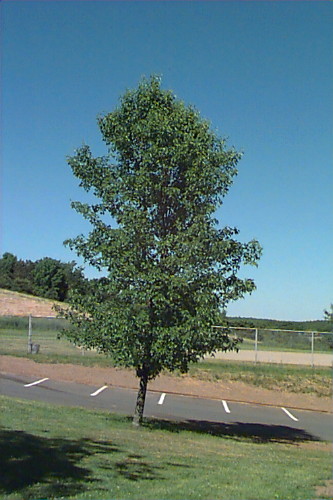 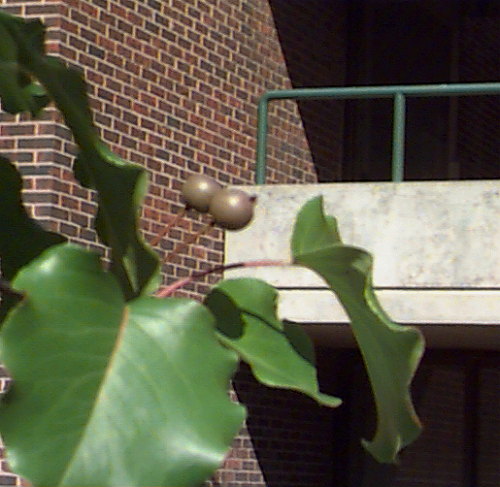 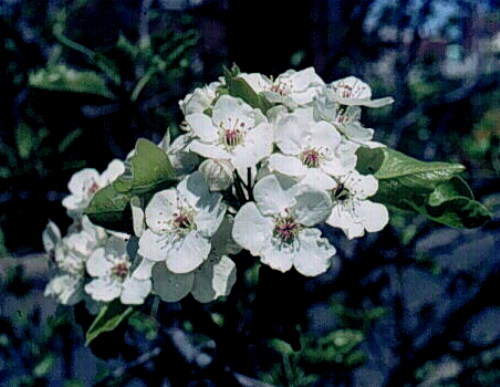 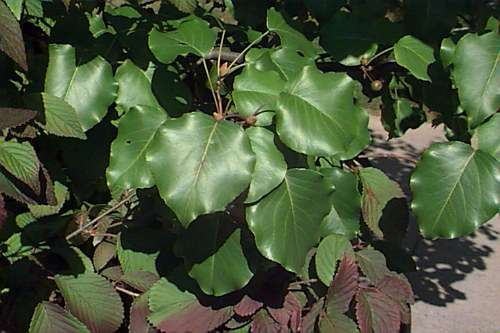 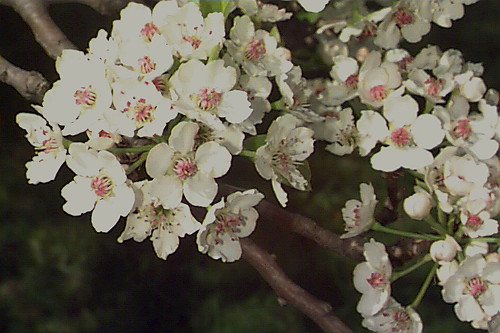 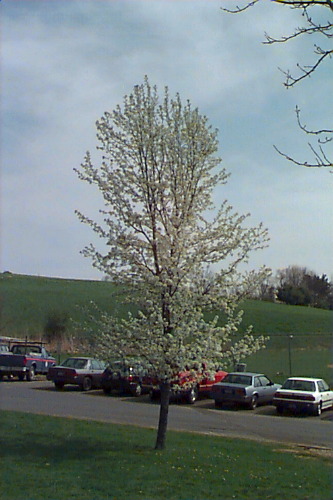 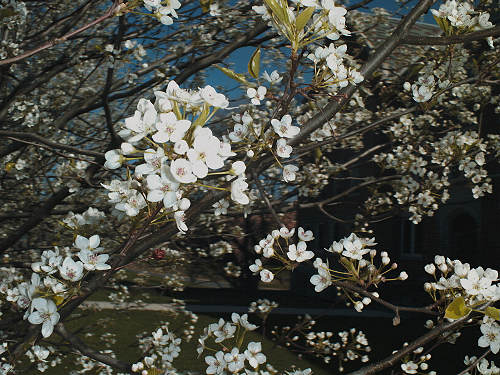 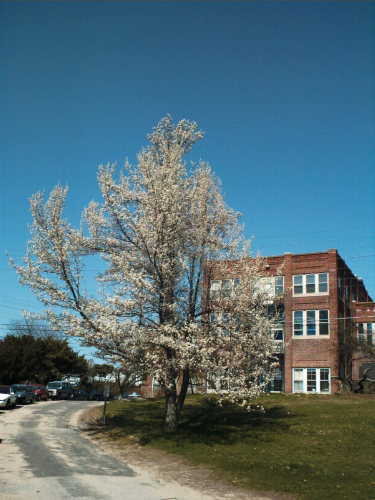 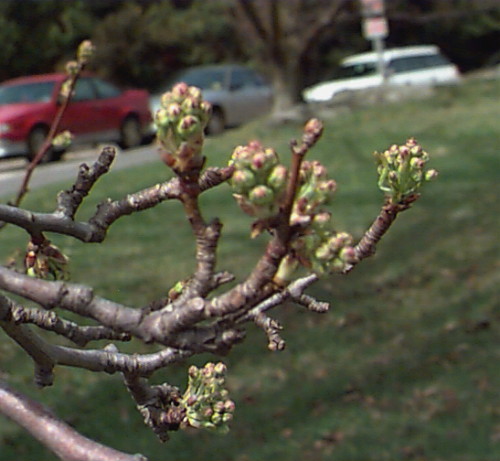 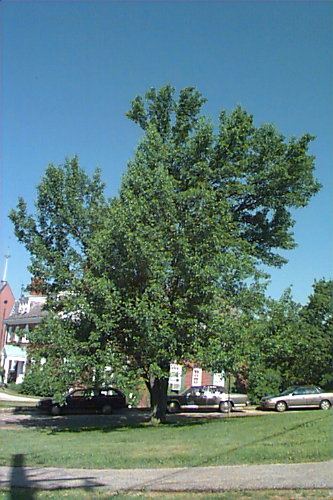 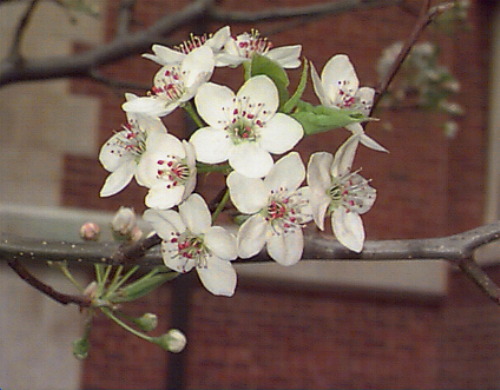 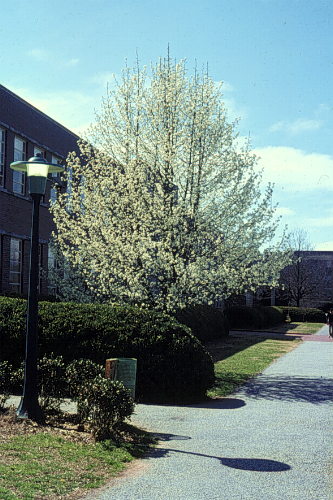 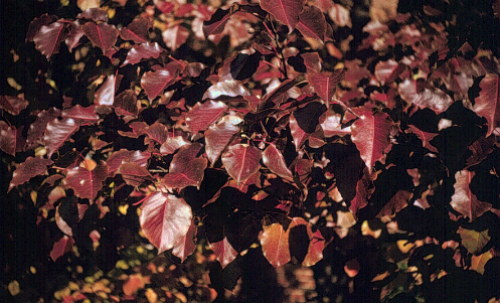 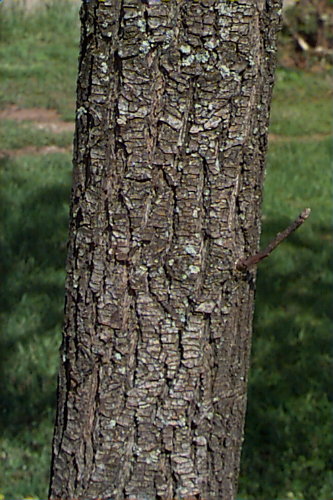 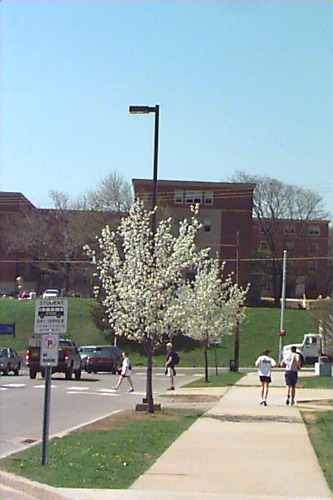 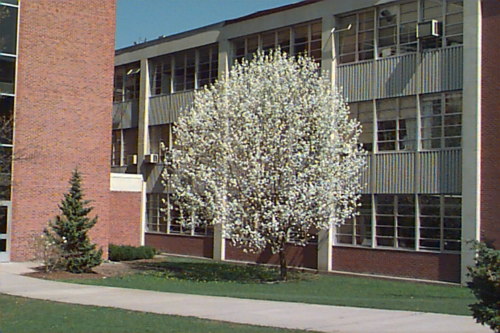 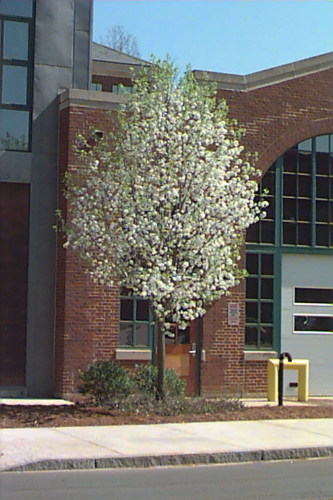 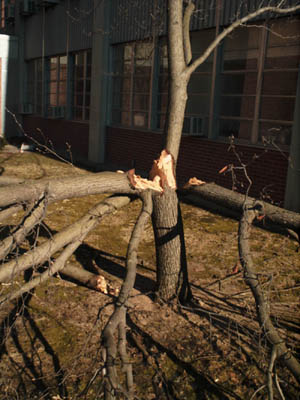 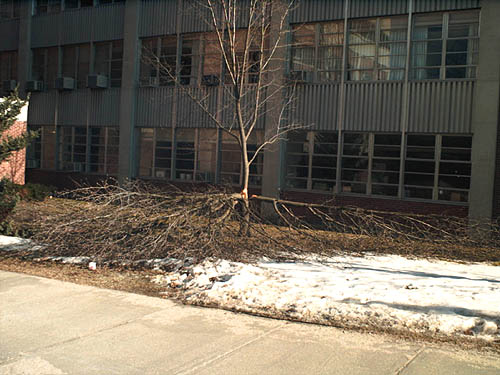 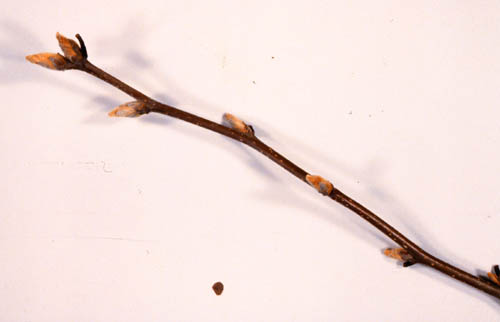 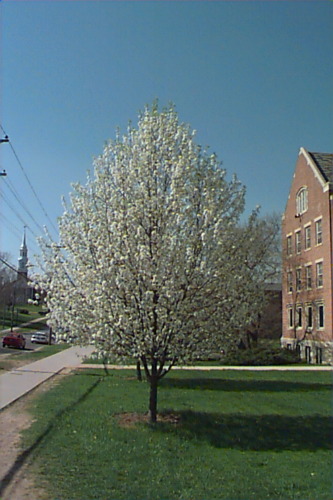 'Aristocrat' - This oval-pyramidal cultivar is preferable to 'Bradford', as its limbs feature a wider branching angle that makes the tree less likely to split. It reaches 35' tall with a slightly more narrow spread and has wavy leaf margins. It flowers slightly later than other cultivars. It expressed the same cold-hardiness as 'Bradford', but may be more susceptible to fireblight.

'Autumn Blaze' - Widely considered the hardiest cultivar available, this selection is also notable for its rounded habit to 35' tall. The fall foliage is a reliable red-purple, but the plant is prone to fireblight and bears some thorns on its branches.

'Bradford' - One of the most common and recognizable ornamental trees in the American landscape, this early-flowering tree is popular for its dense branching and broadly pyramidal habit to 50' tall and 40' wide. It grows quickly as a young tree and offers good resistance to fireblight. However, this tree has a genetic predisposition to form tight branch crotch angles that are points of weakness. Thus, unless pruned the tree will eventually split under its weight due to high winds, storms, ice, snowload, etc. It is therefore strongly recommended that other cultivars be utilized. Regardless of cultivar, Pyrus calleryana is wholly overused in the landscape, leading to monotony and boredom. The rigid habit of the plant also makes the species appear out-of-place in most situations. Other plant choices should generally be investigated when P. calleryana is called for.

'Capital' - Originally conceived as a substitute for the doomed Lombardy Poplar (Populus nigra 'Italica'), this cultivar is strikingly fastigiate. It grows to 35' tall, but only spreads 10'. The glossy green foliage turns red-purple come fall, but the cultivar appears to possess very strong susceptibility to fireblight. This disease problem may recommend against its use.

'Glen's Form' (Chanticleer®, also known as 'Select', 'Cleveland Select', 'Stone Hill' and 'Stonehill') - Considered perhaps the finest selection for contemporary use, this plant assumes an upright, pyramidal habit to 30' tall and 15' wide. It is much narrower than 'Bradford', and also is longer-lived and perhaps hardier. It shows good fireblight resistance and attractive red-purple fall color.

'Fauriei' (also listed as Pyrus fauriei or P. calleryana var. fauriei) - This plant grows more slowly to form a 40' pyramidal-rounded tree. It flowers heavily, but is not as fine an ornamental as other types. The fall foliage colors yellow to red earlier than other types, plus the leaves are not retained as long. It is not offered as commonly as other types.

'Jaczam' (Jack™) and 'Jilzam' (Jill™) - This pair of new selections is notable for dwarf habit, dense growth and a mature size less than half that of standard forms (to 20' tall and wide). The habit is rounded, with lustrous foliage and white flowers.

'Redspire' - This pyramidal-oval selection is looser in form than 'Bradford', with growth that is slower and earlier fall color with shades of yellow to red. It is, however, more prone to fireblight infection than 'Bradford'.

'Whitehouse' - Released by the U.S. National Arboretum, this plant grows much more narrowly than 'Bradford'. It forms a fastigiate pyramid with ascending branches to 40' tall and only 15' wide. It flowers about a week later than other cultivars and develops fall color earlier. Despite initial claims of superiority, it has been observed that this tree is heavily afflicted by leaf diseases that render it problematic in the landscape. This trait makes it inferior to other forms.