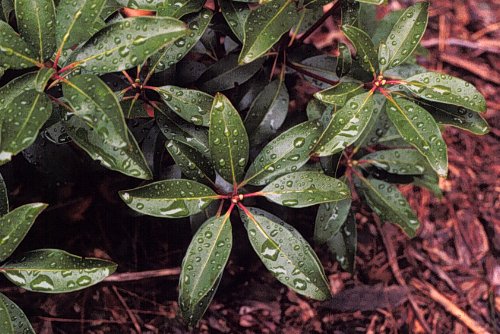 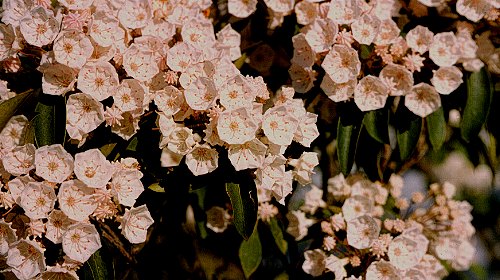 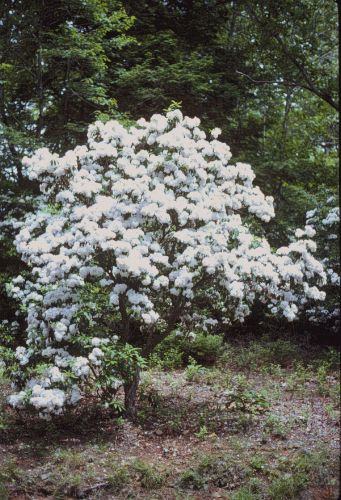 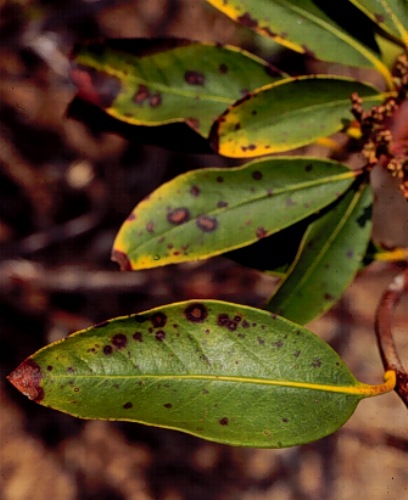 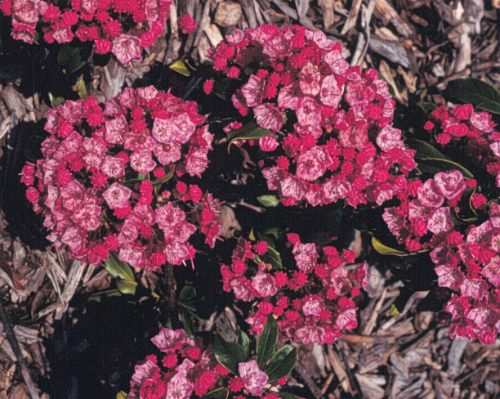 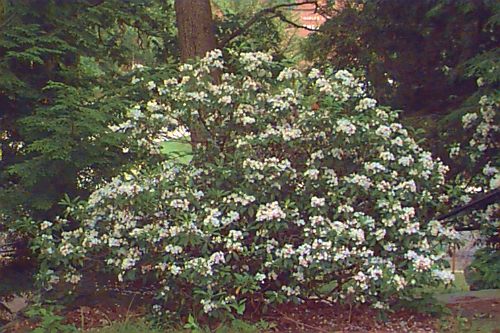 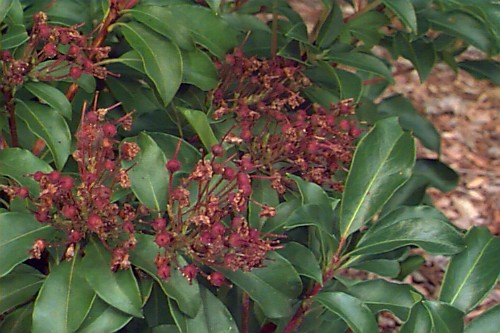 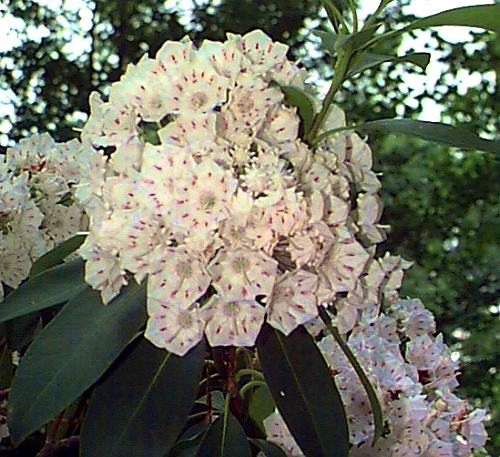 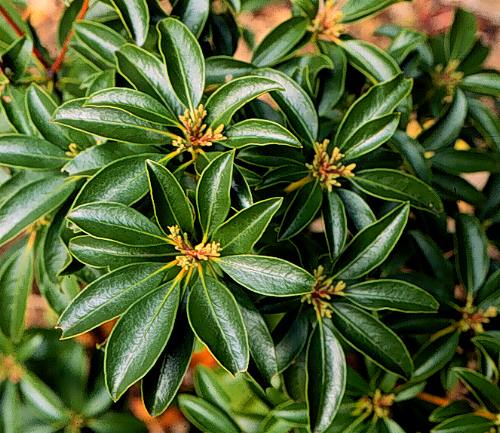 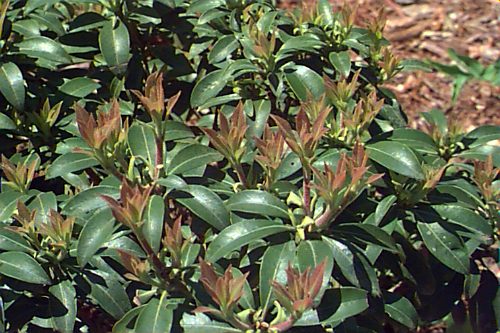 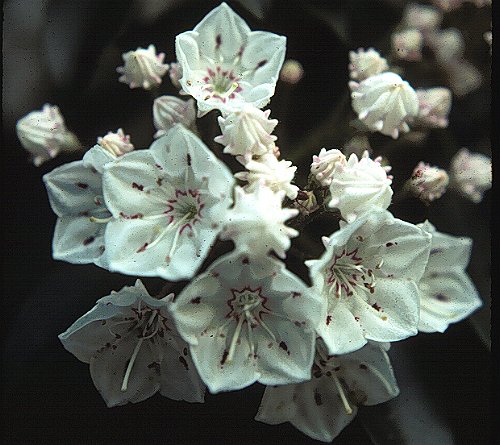 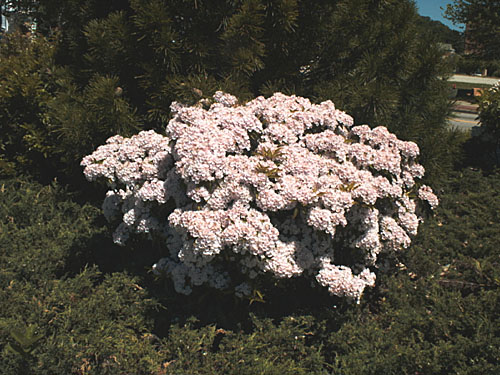 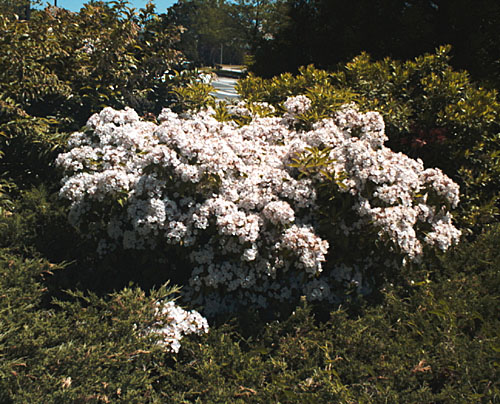 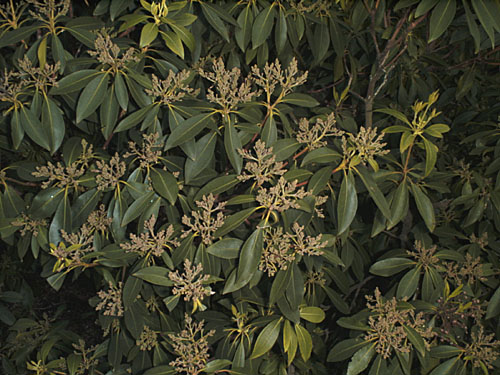 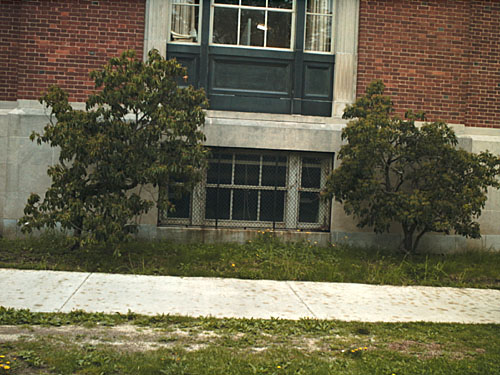 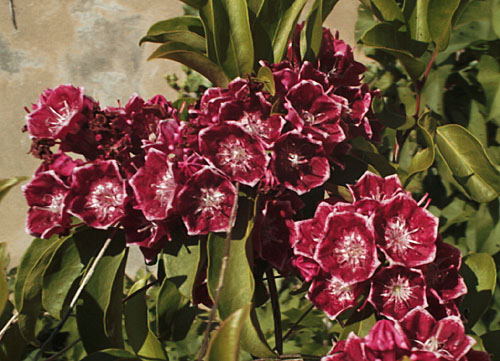 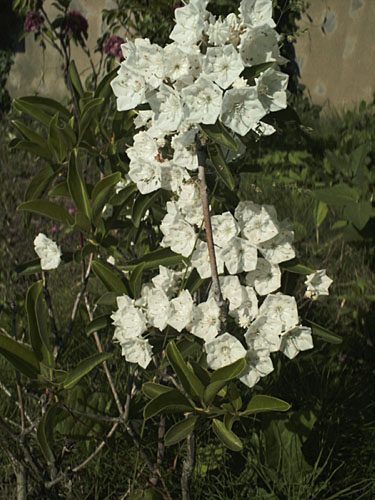 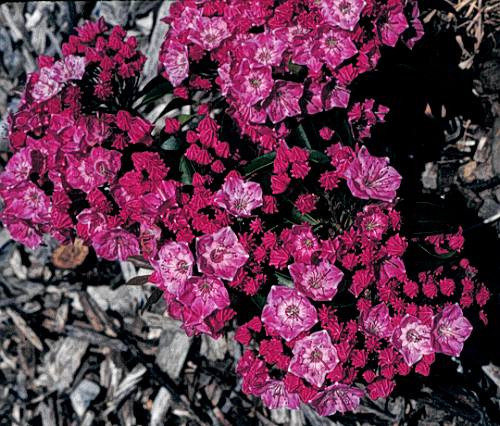 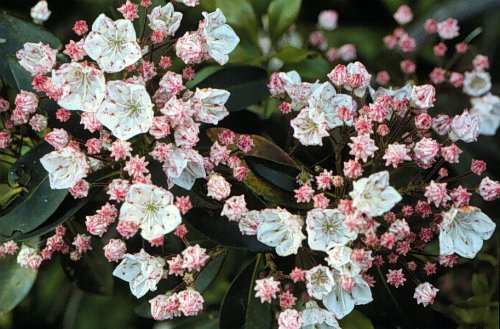 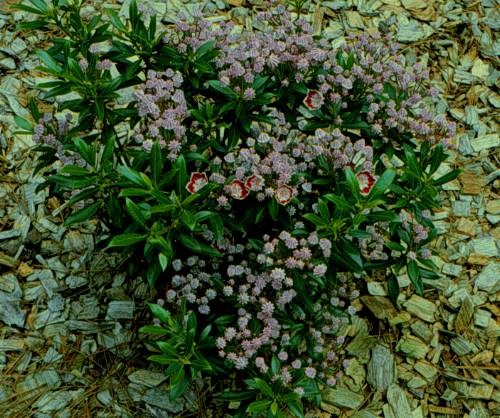 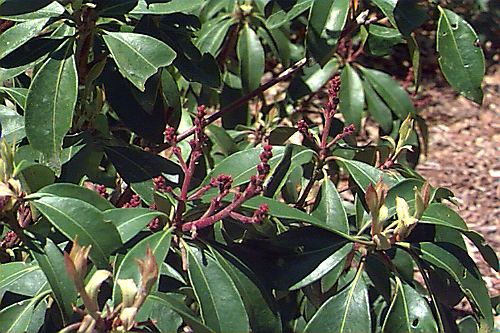 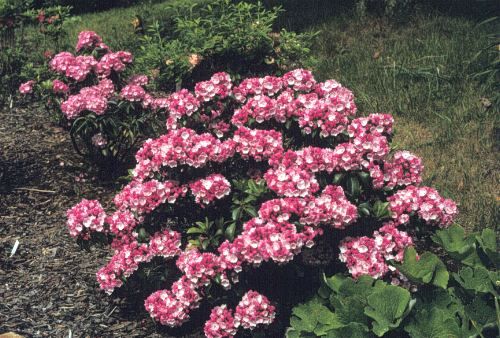 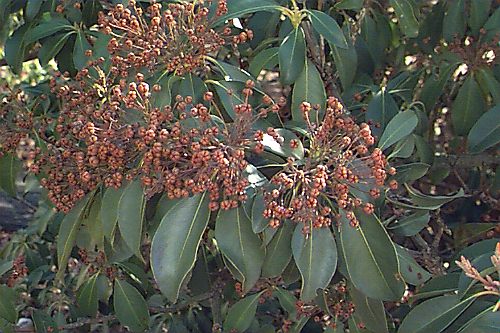 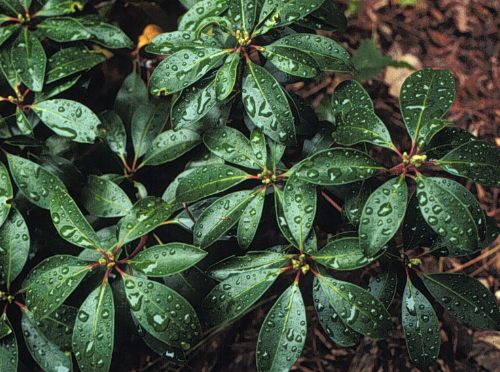 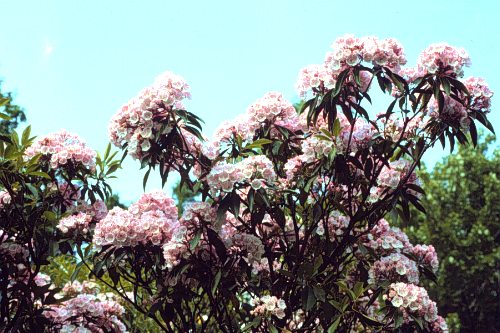 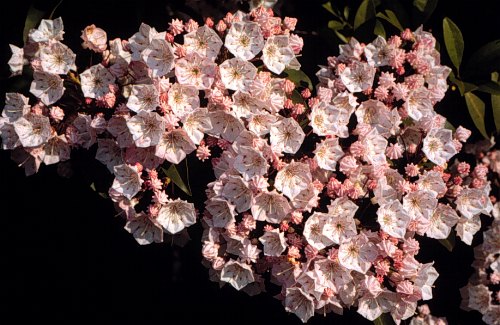 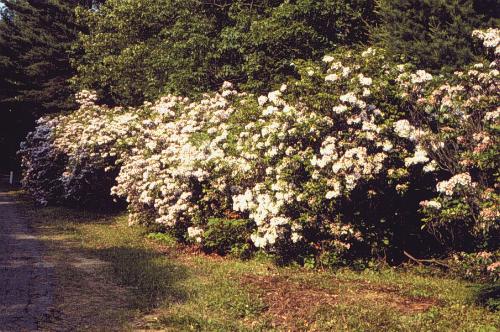 There are now exist many improved Kalmia latifolia cultivars thanks to the efforts of Richard Jaynes, a Connecticut plant breeder. He has introduced dozens of new cultivars, including plants with dwarf habits and highly colored blooms. Those interested in more information on Kalmia species and cultivars can obtain more information in Jaynes' book, "Kalmia: Mountain Laurel and Related Species".

f. angustata - This naturally-occuring form features narrow foliage that is linear, like willow leaves. A few selections of this form have been named and introduced, but they appear to perform poorly in northern gardens.

'Apetala' (also listed as var. apetala) - A curiosity, this plant produces flowers that lack most of their petal structure and consist mainly of pinkish-white extended stamens.

'Bay State' - The flowers of this type are salmon-pink or coral-pink when open, and reddish pink in bud. It possesses shiny, heavy, dark green foliage that is leaf spot resistant. The habit is dense.

'Bridesmaid' - Dark pink buds open to reveal a bicolor bloom on this plant. The outer edges of the flower are pink, while the center is light pink to white. With age, the corolla edge rolls back, making each flower look like a pink porcelain plate. The foliage is dark green and leaf spot resistant. It blooms excessively in sun, so it is best situated in part shade to strike a better balance between shoot growth and flower production.

'Bullseye' - The flowers of this selection have a purple band of pigmentation inside the corolla. It does not set flower buds when young, but exhibita a vigorous, upright growth habit. The emerging foliage is reddish.

'Carol' - Very striking in flower, this plant has buds that are dark-pink outside and light pink to nearly white when open. The habit is dense, compact and low. The foliage is shiny green, leaf spot resistant and shows wavy margins. It is one of the most popular cultivars on the market.

'Carousel' - This variety has flowers with an intricate pattern of bright purplish-cinnamon pigmentation on the inside of the corolla. The flower edge is marked with white. It is a vigorous grower with dark green, glossy, leaf spot resistant foliage.

'Comet' - This plant bears unusual flowers that are white and deeply-lobed. It is an improved form of 'Shooting Star' with better habit, foliage and cold hardiness.

'Elf' - The first miniature or semi-dwarf K. latifolia introduced, this plant is derived from K. l. f. myrtifolia and has smaller leaves, slower growth and leaves closely spaced along the stem. The flowers, however, are nearly full-sized; pink in bud and nearly white when open. Young plants grow vigorously and can become leggy without pruning.

'Freckles' - The flowers of this selection have 10 purple-cinnamon spots on the inside of the white corolla. The habit remains low and somewhat spreading, and the plant buds well when young.

'Fresca' - This form belongs in the K. l. f. fuscata group. The white flowers have a chocolate-purple band on the inside of the corolla. This cultivar has a reputation for being a tall, open grower. It is an early introduction that is not produced commercially any longer.

f. fuscata - A botanical form with a dark brown to purple band of pigment inside the corolla, this plant has led to the development of many cultivars with banded corollas. It occurs sporadically in wild populations.

'Galaxy' - The unusual flowers of this selection have 5-petal-like lobes that are burgundy on the inside due to a wide pigmented band. They are white on the corolla backside, creating an interesting bicolor effect.

'Goodrich' - This selection is notable for the cinnamon-brown band that nearly fills the inside of the corolla. Plant vigor and foliage quality have not been as good on this plant as for other cultivars.

'Heart of Fire' - A vigorous, upright grower, this plant bears flowers that are red in bud and open pink. The foliage quality is good.

'Heart's Desire' - The red flower buds of this selection open to reveal cinnamon-red pigmentation that nearly fills the inside of the corolla. The dark green, leaf spot resistant foliage and dense, well-branched habit help round out this fine plant.

'Madeline' - This unusual plant, discovered in New Zealand as a cultivated plant, features semi-double blooms with multiple petals in the corolla. It is pink in bud and white-pink when open.

'Minuet' - Recognized as perhaps that best f. myrtifolia-type miniature mountain laurel to date, this plant offers buds that are light pink and open to display a corolla with a wide, almost cherry-red band inside. The foliage is very glossy, dark green and slightly cupped.

f. myrtifolia - This botanical form is characterized by a slower growth rate and smaller leaves that are spaced closely along the stem. The flowers, however, are nearly normal size. Most of the new miniature cultivars are derived from this form.

'Nathan Hale' - The red buds of this selection open pink. The growth habit is dense and relatively compact, with foliage that is shiny, dark green and leaf spot resistant.

'Nipmuck' - This is a red-budded cultivar with flowers that open pink. The foliage quality, howver, is not as good as newer red-budded selections.

'Olympic Wedding' - Lavender-pink in bud with maroon-banded blooms, this cultivar has a growth habit that is somewhat open. The foliage turns purplish in the winter.

'Ostbo Red' - This was the first red-budded selection to be named, and it is still considered one of the best of its color type. The leaves are cupped and somewhat smaller than the species, while the habit is fairly dense.

'Peppermint' - A new form selected for its unique flower color pattern, it has striking white flowers with 10 red "spokes" radiating from the flower center.

'Pink Charm' - This form has dark pink flower buds that open to a rich pink. It sets flower buds well, even at a young age.

'Pink Surprise' - The buds and open flowers of this cultivar are pink. The new growth is purplish-red, but the habit is somewhat open and leggy. It was coined 'Pink Surprise' because it is surprisingly easy to root for propagation purposes.

'Pinwheel' -The cinnamon-maroon flowers of this variety bear white centers and scalloped edges. It has good quality, dark lustrous green foliage that is leaf spot resistant. The habit is relatively compact.

f. polypetala - This botanical form is rare in nature and features a flower corolla that is cut into 5 strap-like petals.

'Raspberry Glow' - A form with burgundy-red flower buds that open to a very deep pink, this selection is notable as the reddish flower color develops well even in shade. It has proven to be very tolerant of adverse landscape situations in University of Connecticut tests.

'Richard Jaynes' - Named after the famed Kalmia hybridizer, this heavy-flowering form has reddish buds that open to whitish-pink blooms. The foliage is lustrous and handsome.

'Sarah' - This is perhaps the reddest K. latifolia cultivar in flower. However, the flowers are actually red in bud and pink-red when open. It resents over-fertilization.

'Shooting Star' - The unique blooms of this selection consist of a corolla that is cut to reveal 5 distinct lobes, with each lobe reflexed once the flower opens. It was found in the wild in North Carolina, therefore it lacks sufficient cold hardiness to perform well in zone 5. The foliage is yellow-green when young and can be mottled when mature. The growth habit is not especially good.

'Silver Dollar' - This form was selected for its oversized flowers that are about the size of an old silver dollar. The flower color is very light pink to white, and the leaves are also a bit larger than normal.

'Snowdrift' - A form that is pure white in bud and when fully open, this plant is considered by many observers to be one of the best pure white-flowering cultivars. The foliage is dark green, thick and leathery -- an attribute rarely found in white-flowered mountain laurel forms.

'Tiddywinks' - A fine semi-dwarf form of K. l. f. myrtifolia, this plant has excellent branching and develops a low compact, mounded habit. The flower buds are a strong pink and open to soft pink blooms.

'Tightwad' (also listed as 'Tightwad Too') - A most unusual form, this plant bears pink buds that swell but never open. They may persist for several weeks on the plant.

'Tinkerbell' - This plant is very similar to 'Tiddywinks', but the flower color is slightly darker.

'Willowcrest' and 'Willowood' - Both of these cultivars are selections of f. angustata with narrow, linear strap-like foliage. As they were found in the Carolinas, they have not been especially good performers in zone 5.

'Yankee Doodle' - The buds of this cultivar are bright red-pink and open to show a pink corolla with a narrow maroon band. It is a vigorous grower and has performed well in USDA zone 5 landscapes.