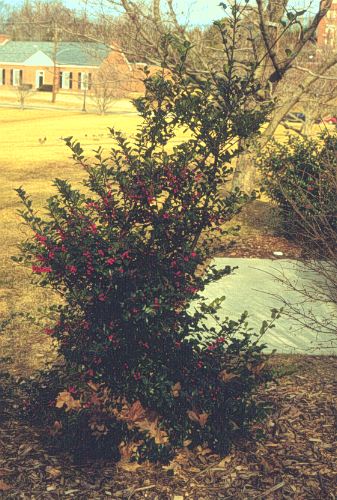 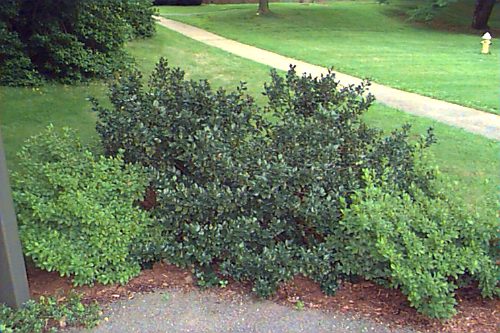 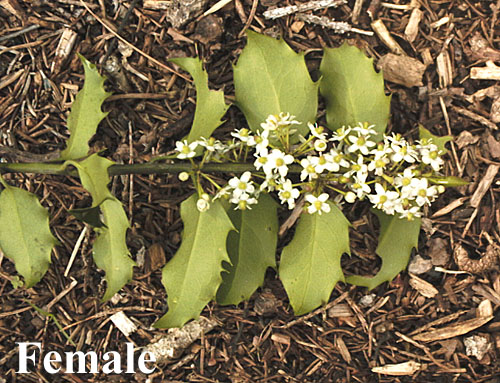 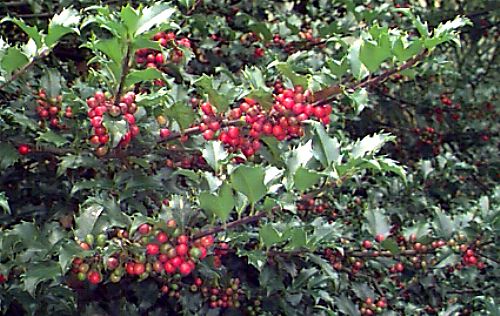 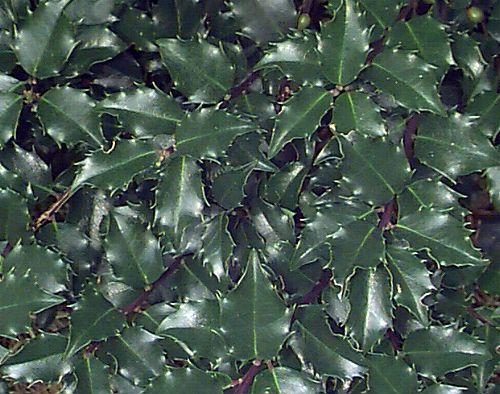 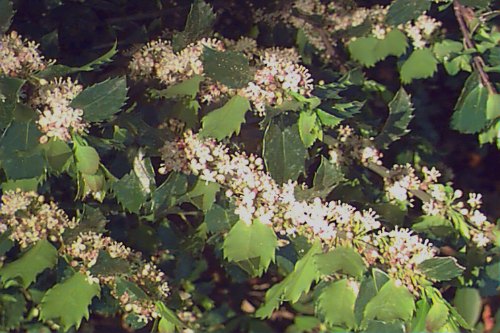 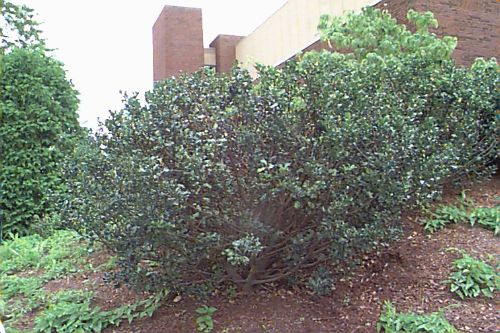 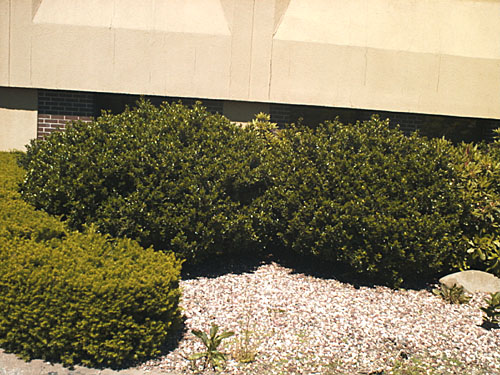 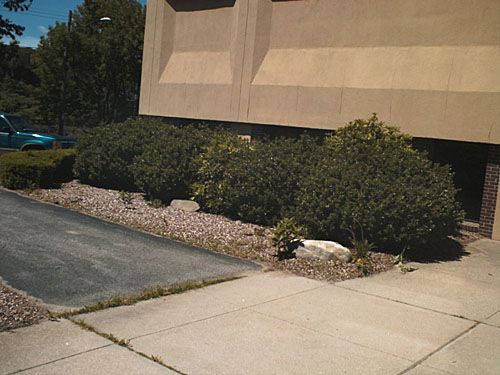 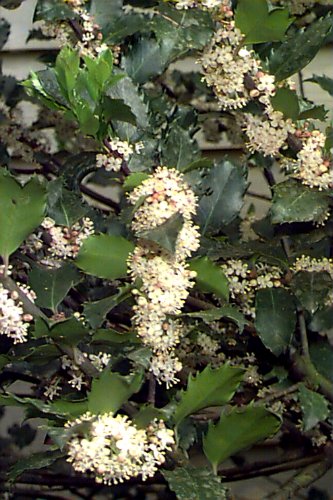 The following are I. rugosa x I. aquifolium hybrids, referred to as Blue Hollies:

'Blue Angel' (Blue Angel®) - This slow-growing cultivar is the least cold hardy of the group. It is the result of a backcross of I. x meserveae to I. aquifolium. As a consequence, the plant has larger, crinkled leaves and reduced cold hardiness from the added I. aquifolium influence. It is a female selection with shiny red fruits and grows full and dense to 8' tall and wide.

'Blue Boy' - Introduced in 1964 as one of the first Meserve Hollies, this male form is a fairly good performer. It grows well over 10' tall and has good quality lustrous green foliage.

'Blue Girl' - This is the female counterpart to 'Blue Boy' with bright red fruit. It was one of the original Meserve Holly introductions in 1964. It offers good cold hardiness, but seems to grow a bit more open than 'Blue Princess'. The overall habit is pyramidal to around 8' tall.

'Mesid' (Blue Maid®) - A hardy, fast growing female selection, this plant assumes a pyramidal habit to 15' tall. It offers abundant bright red fruit. Though this plant has been touted as being the most cold hardy form, both 'Blue Princess and 'Blue Girl' appear to stand up to cold just as well.

'Blue Prince' (Blue Prince®) - This male selection was introduced in 1972. It has an excellent dense, compact habit to 12' tall with good quality, dark shiny green foliage. It is considered both an excellent pollinator for Meserve Hollies and a handsome, easily-pruned landscape plant. The plant has proven cold hardiness down to -20 degrees F. and is the most popular male selection of this group.

'Blue Princess' - The most popular female selection, this plant was introduced in 1973. It offers very dark blue-green foliage that is shiny. The fruit color is a darker red than many others and the drupes are abundantly produced. Cold hardiness is reliable to the -15 to -20 degrees F range. The habit is broad and shrubby to 15' tall. Some feel this is the best of the group.

'Honey Maid' and 'Gretchen' - These new female forms are variegated sports grown primarily for their leaves which are splotched and margined with yellow. They grow smaller (to 6' tall) and form red fruits. The hardiness of these plants allows growers in colder regions to enjoy an evergreen variegated holly.

'Mesan' (Blue Stallion®) - A male selection with a long blooming period, this form serves as an effective pollinator. It grows more rapidly than 'Blue Prince' (Blue Prince®) (to 12' tall and wide). The foliage -- borne on attractive purplish stems -- lacks prominent spines and is a dark, shiny green.

The following are I. cornuta x I. rugosa hybrids:

'Mesdob' (China Boy®) - Reportedly cold hardy to -20 degrees F., this male selection is useful as a pollinator for 'Mesog' (China Girl®). The foliage is glossy green and the plants grow to about 10' tall with similar spread. The habit is rounded and dense in the landscape. The "China Series" appears to be both more heat and cold tolerant than the I. rugosa x I. aquifolium hybrids (Blue Hollies).

'Mesog' (China Girl®) - This is a female clone that is pollinated by 'Mesdob' (China Boy®) and features abundant 1/3" red fruit on a 10' tall and wide shrub. It has been embraced as an excellent landscape plant and displays better heat tolerance than the Blue hybrids. The leaf margins of this selection and its male counterpart turn under, leading to a "cupping" effect that separates these plants visually from the Blue hybrids.

'Meschick' (Dragon Lady®) - This hybrid of I. pernyi x I. aquifolium is useful as a screen or hedge because of its strong pyramidal-columnar habit to 20' tall with a 6' spread. The leaves are spiny and dark green, while red fruit are produced using 'Mesan' (Blue Stallion®) as a pollinator.

'Mesgolg' (Golden Girl®) - This plant is notable as the first Meserve hybrid with yellow-orange fruit. It has a broad pyramidal habit and a dense complement of foliage.