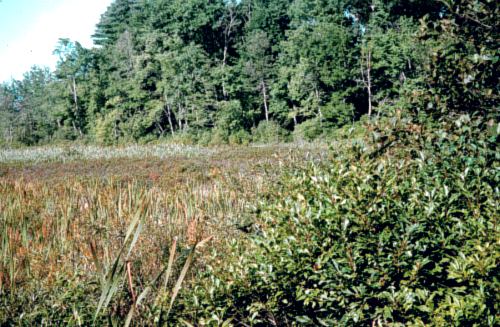 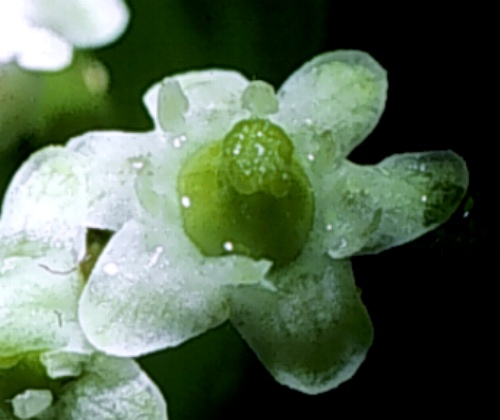 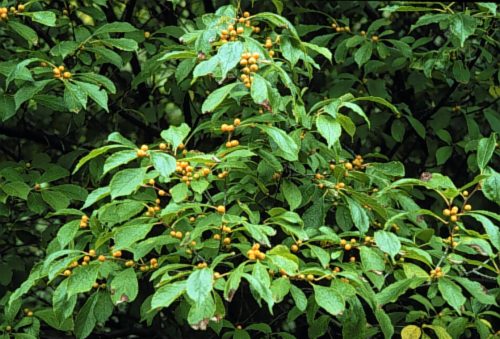 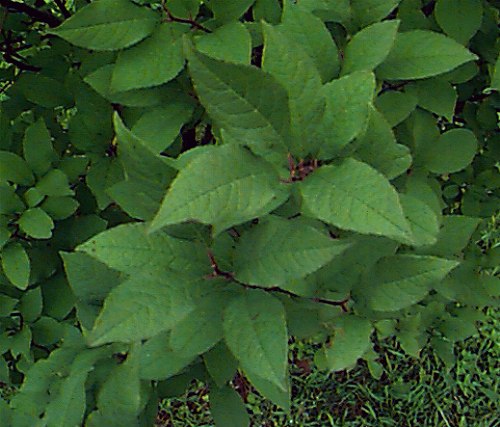 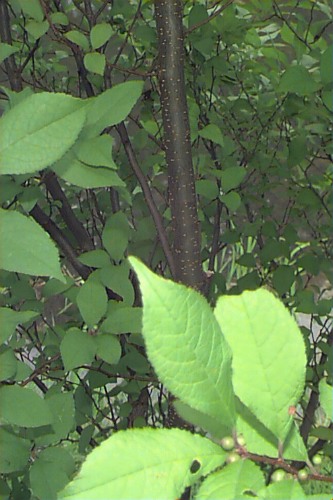 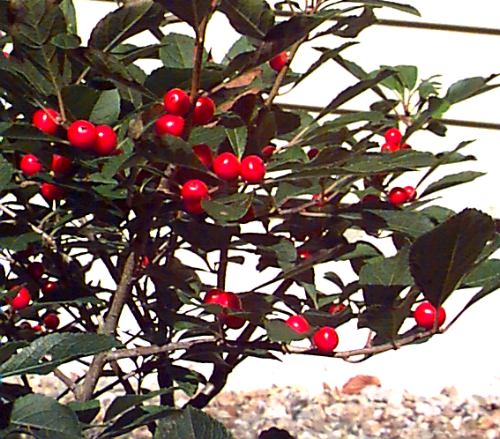 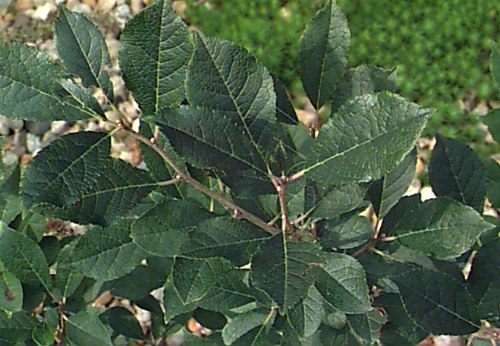 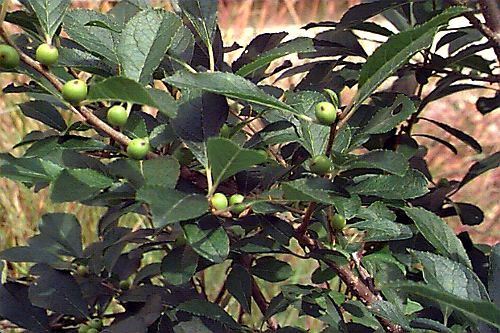 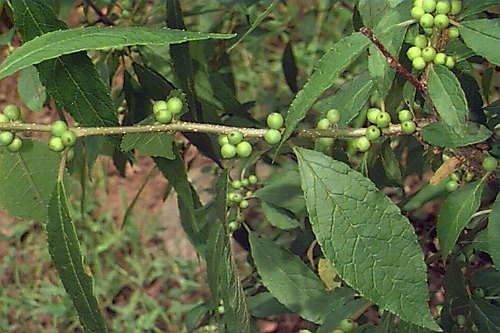 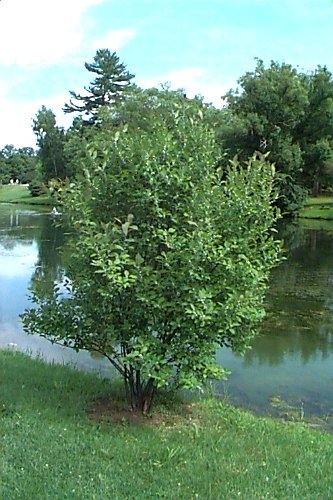 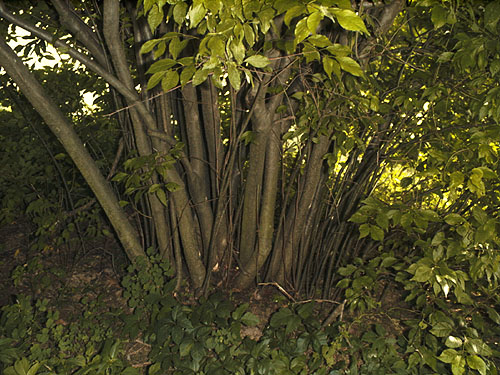 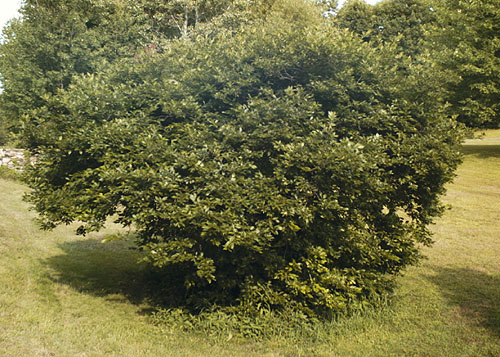 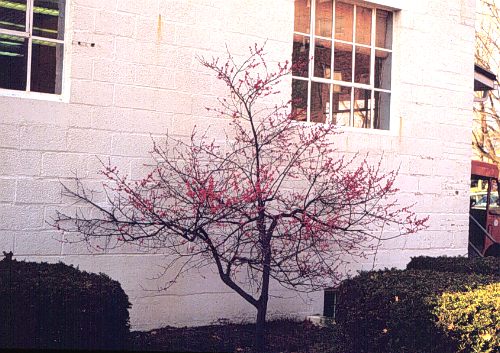 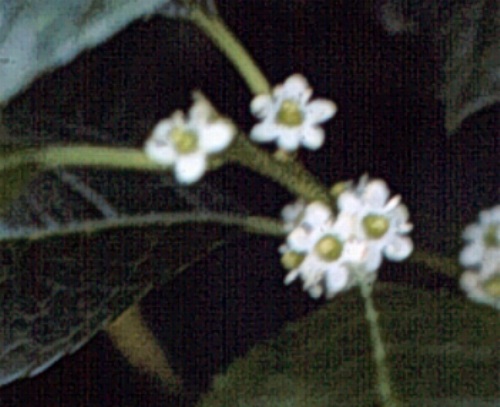 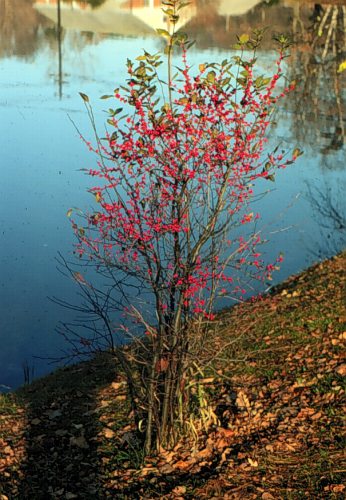 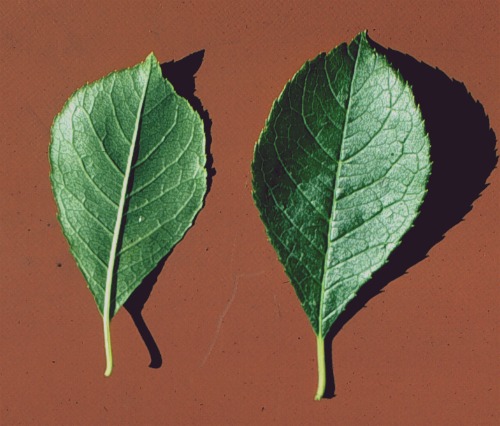 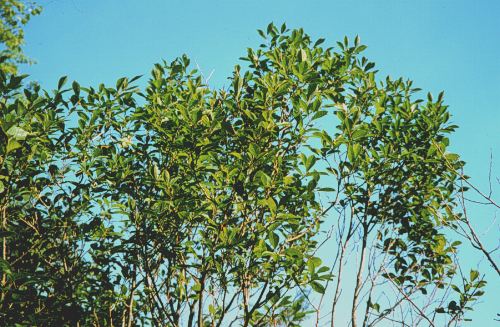 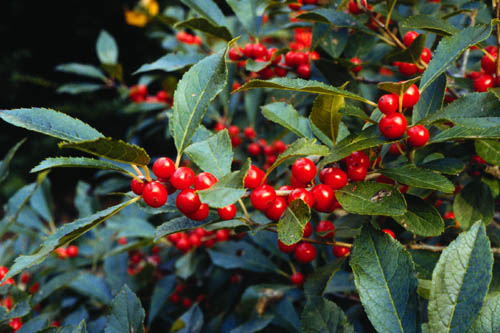 'Afterglow' - This form features glossy green leaves that are smaller than typical. It is compact growing (to 10' tall and wide) with large orange-red berries maturing to orange. It is best pollinated with 'Jim Dandy'.

'Aurantiaca' - An unusual form, this cultivar produces orange-red fruit that fade to orange-yellow. These fruit are less persistent than most red fruited forms, plus they may discolor easily. It blooms early, thus it is best pollinated by 'Jim Dandy' or other early- flowering male selections. The habit is around 5' tall; slightly larger than 'Red Sprite'. 'Chrysocarpa' (correctly I. v. f. chrysocarpa) is a naturally-occuring yellow-fruited form.

'Cacapon' - This plant grows to 5' tall, possible more. It is similar to 'Afterglow', but more upright in growth. It is heavy-fruiting, with true red fruit, plus the leaves are textured and dark green and glossy. Use 'Jim Dandy' as a pollinator.

'Jim Dandy' - A slow-growing, early-flowering dwarf male clone, this cultivar is useful as a pollinator for early-flowering female clones such as 'Afterglow', 'Aurantiaca' and 'Red Sprite'. It grows to about 5' tall.

'Red Sprite' - A very popular, award-winning form, this dwarf female clone matures at only 3' to 4' tall. The habit is pleasantly mounded. Early blooms produces numerous, very large red fruits which persist well in the winter. This USDA release is widely considered to be one of the best winterberries. Use 'Jim Dandy' to pollinate. 'Shortcake' is similar, but larger (to 5' tall), with smaller fruit.

'Shaver' - An early-flowering form (use 'Jim Dandy' to pollinate), this plant produces orange-red fruit and glossy leaves on an upright, 5' tall shrub.

'Stoplight' (also known as 'Hopperton') - This is a newer selection with large, deep red fruit and glossy foliage on a 8' tall plant. 'Jim Dandy' should be used as a pollinator.

'Sunsplash' - A very unusual and rare form, this plant sports leaves irregularly mottled and marked with yellow. The variegated leaves are complemented by red drupes on this female clone.

'Winter Red' (Winter Red®) - This popular form is widely accepted as one of the best winterberries. It forms an upright, rounded shrub to around 8' tall with dark green foliage. The bright red fruit are borne in profuse quantities and they persist into winter consistently.

'Apollo' - This is a male clone useful as a late pollinator for 'Sparkleberry' and 'Winter Red'. The new growth is burgundy-red, and the habit is ascending-upright with a final height of 10' to 12' tall. A U.S. National Arboretum introduction.

'Autumn Glow' - A selection out of Rutgers University, this plant is dense-growing to 10' tall and wider. The red fruit persist well, but may discolor. Reports vary concerning fall color, which may include yellow and orange shades.

'Bonfire' - Most notable for its profusion of small red fruit early in the season, this selection fruits at an early age and holds the fruit well. It will reach 12' tall and wide with a mounded habit. 'Apollo' should be used as its pollinator.

'Harvest Red' - This plant produces deep red, large fruit on a 10' tall and 15' wide plant. The leaves may color yellow in fall. Use 'Raritan Chief' to pollinate.

'Raritan Chief' - This is a male clone used to pollinate many deciduous holly hybrids, as it flowers over a long period. It may reach 12' tall and features attractive glossy, light green foliage.

'Sparkleberry' - This award-winning, popular selection is common in the trade. It ultimately reaching 12' tall and can become somewhat leggy at the base due to its upright growth habit. The main attraction are the abundant red fruit that are medium-size and persist well, often until spring. Use 'Apollo' to pollinate this U.S. National Arboretum introduction.